A Crisis of Truth and Trust by Virgil Scudder 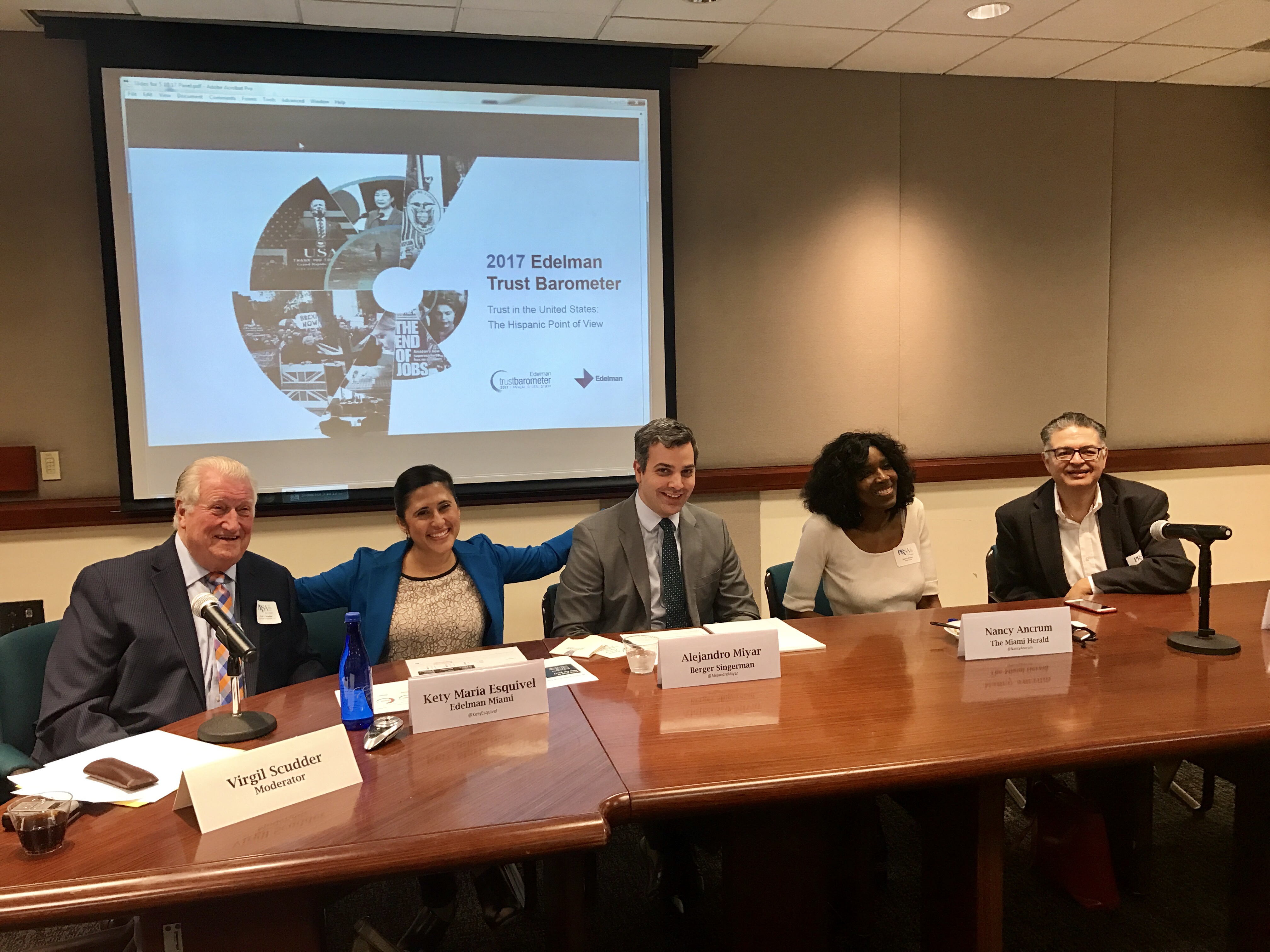 “Trust but Verify.” That’s an old Russian proverb that President Reagan was fond of quoting. However, in the U.S. and around the world today studies show that people are doing less trusting and less verifying in general while increasingly placing unquestioning trust in statements (often false) that simply reinforce what they already believe.
A panel of four experts with experience in media, government, law, and public relations tackled that problem in a panel discussion May 10 in Miami titled “Navigating the Era of Alternative Facts: Restoring truth and trust.”
The session, sponsored by the Miami chapter of the Public Relations Society of America, featured Kety Esquivel of Edelman Public Relations; Miami attorney Alejandro Miyar, whose resume includes service as Miami Deputy Mayor and U.S. Justice Department spokesman in Washington; Editorial Page Editor Nancy Ancrum of the Miami Herald; and Senior Editor Sergio Bustos of Politico States.
Esquivel said the 2017 Edelman Trust Barometer recently reported the largest-ever drop in trust across the institutions of government, business, media, and non-government organizations. The 28-country survey found that trust in media (43 percent) fell precipitously and is at all-time lows in 17 countries. The general public’s trust in media was also at a record low in the U.S., coming in at only 47 percent.
“The cycle of distrust is magnified by the emergence of a media echo chamber that reinforces personal beliefs while shutting out opposing points of view,” said Esquivel. She added, “Respondents favor search engines (59 percent) over human editors (41 percent) and are nearly four times more likely to ignore information that supports a position they don’t believe in.”
Party loyalties play a role in the U.S. Bustos cited a new Pew Research Center study that found that nine out of ten Democrats say news media criticism keeps leaders in line while only four in ten Republicans believe it. “That 47 percent gap,” he noted, “was never previously approached in over three decades of polling.”
Ancrum sees fake news as a real and serious problem, stating “There are people who get paid to generate fake news and they do very well. One young man once wrote that President Obama had done something heinous. It was not true but it made Fox News and he was paid very handsomely for that.”
She mentioned other instances including one in which a politician was quoted as saying, “The poor don’t deserve health care.” Another example had Vice President Mike Pence commenting, “If more people believed in Jesus, they wouldn’t get sick.” The problem? Both were fake news. The politicians cited never said those things but the stories flew around social media.
Attorney Miyar declared that, “Most indications are that we are in the midst of the “society of the spectacle. Society is more concerned with getting things first than getting things right.”
He added, “The era of ‘alternative facts’ is an obvious symptom of technological disruption and evolution. We’re doing things faster and paying less attention.”
Information overload was cited by the panelists as part of the problem. Bustos commented, “There is now less of a news cycle and more of a cyclone. (We have) the information equivalent of standing in front of a tennis ball machine.”
All panelists agreed that fake news would be less of a problem if more people would check out stories before circulating them on social media. Ancrum recommended logging on to non-partisan fact-checking sites such as FactCheck.org or snopes.com when in doubt about whether a story is true.
So, how, in an era of widespread distrust, can a news source build and maintain the confidence of the media? Bustos recommended three steps: know your local journalists, be open and transparent about your story, and cite sources for your statements.
More details on the panelists’ comments are included in a 17-minute video of their opening remarks. Here’s the link: