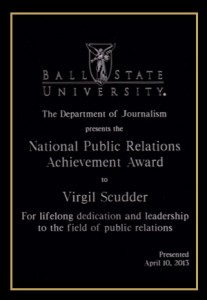 Virgil Scudder was presented the prestigious 2013 National Public Relations Achievement Award in a ceremony at Ball State University in Muncie, Indiana, on April 10. The award is given for lifetime contributions to the public relations profession and leadership in the education of the next generation of PR professionals.

Previous winners include some of the most honored names in the public relations field such as Burson-Marsteller co-founder Harold Burson, Edward Bernays, considered the father of modern public relations, publisher Denny Griswold, Chet Burger, John Graham, Dan and Richard Edelman, and Larry Foster.

In his acceptance remarks, Scudder declared that both public relations and journalism are in crisis today. “There is a great loss of trust in both,” he declared, “and it’s not totally unjustified.”

He continued, “Too many so-called news outlets are just propaganda machines, spewing out more bias than fact. Too many PR professionals practice spin, rather than honest advocacy.”

Noting that both professions play an important role in an informed society, Scudder called on them to serve the common master of integrity. “You are our conscience and our watchdogs, he declared. The PR professional must be the moral heart of an organization. The journalist must serve the same role for society at large. We need both of you to give us reliable information and perspective.”

“It won’t always be easy,” he concluded,” but, it will always be vital to the well-being of your professions and to society.”